Historically such travels served to expand the knowledge of the earth and were often well documented in books, carnets de voyages, journals and other publications.   Before the advent of photography such associated travel images were often 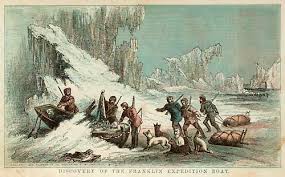 sketched by hand or later related to artists who would then reproduce imagery of what the explorer had seen and experienced in far away lands.  The famous lost Franklin expedition, an 1845 Arctic expedition lead by Sir John Franklin, is one whose tragic tale is today less known but whose trace remains well preserved in the archive and its corresponding treasure trove of accompanying images.

As a librarian I can attest first-hand to the power and importance of such early images in generating new interest in libraries and research.  Last year I worked as part of an academic team producing a short film from the Le Moyne- De Bry engravings of 16th century Florida, digitized by the State Archives of Florida from the Fisher family’s original edition and animated by UF’s Digital Worlds Institute*.  Such visual resources and projects have the potential to bring history to life for a new generation of students and researchers. Other academic sites highlighting early expeditions include Harvard’s Expeditions and Discoveries which does a wonderful job of emphasizing the importance and diversity of more modern travels and excursions.

*The French in Florida short film.